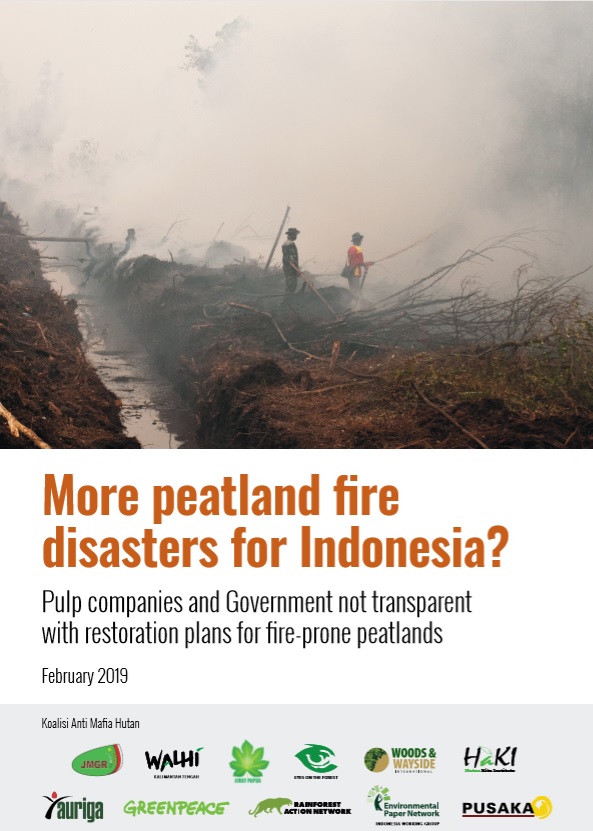 In February 2018, 45 industrial timber plantations (HTI) had submitted revised work plans to the Ministry of Environmental and Forestry. Nowadays, “neither the list of companies nor details of the changes to the work plans, has been released for public review,” the Coalition (KAMH) said in their released report entitling More peatland fire disasters for Indonesia? Pulp companies and Government not transparent with restoration plans for fire-prone peatland.

Following catastrophic fires in 2015 that burnt 2.6 million hectares (ha) and caused losses for Indonesia of US$ 16.1 billion, the Government of Indonesia prioritized the protection and restoration of carbon-rich peatlands. In 2016, the Peatland Restoration Agency was established, and regulation PP 57/2016 imposed new requirements for the protection and management of peatlands.

Subsequently, the Ministry of Environment and Forestry issued implementing regulations that included a map of peat hydrological units covering 24.7 million ha – half of which the Ministry designated for cultivation (12.3 million ha) and the other half for protection (12.4 million ha). The peat protection zones include large areas in Sumatra and Kalimantan that had been drained for industrial pulpwood plantations (hutan tanaman industri, HTI) and palm oil estates over many years.

Therefore, the Ministry of Environment and Forestry required forestry license holders with working areas in the protection zones to revise their long-term management plans (rencana kerja umum, RKU) and annual work plans (rencana kerja tahunan, RKT). The KAMH coalition said the lack of transparency prevented public from being able to monitor the restoration of peat ecosystems in HTI concession areas.

The report presents an analysis of the map of peat functions contained in Ministerial Decree 130 of 2017 (hereafter SK 130) on the Delineation of an Ecosystem Function Map for Peatlands to determine the restoration obligations of Indonesia’s two largest pulp producers, Asia Pulp & Paper (APP) and Asia Pacific Resources International Limited (APRIL).

The Ministry’s peat function map was overlaid with the HTI pulpwood concessions reportedly supplying wood to APP and APRIL. In the case of wood suppliers for APP and APRIL, the Ministry’s peat function map indicates that over 12,000 square kilometers of HTI concessions – an area over 16 times the size of Singapore – are now to be protected and restored. Within the peat protection zones, no new development is allowed, and areas already developed must not be replanted and instead be restored.

The largest areas that overlap with the peat protection zones are in South Sumatra, surrounding PT OKI Pulp & Paper Mills, APP’s newest production facility. Within APP supplier concessions in that province, 323,581 ha are located inside the peat protection zones, comprising nearly one-half of the land that had been planned to serve as the OKI mill’s fiber supply base. These findings strengthen previous concerns of the Koalisi Anti Mafia Hutan regarding the inadequacy of APP suppliers to meet the wood fiber requirements of the group’s three mega-scale pulp mills in Sumatra.

Historically, these two concessions have supplied much of the wood requirement for APRIL’s pulp mill in Riau province. Government supervision is required for these two groups to follow through on their sustainability commitments and to ensure that the peat protection zones within their licensed areas remain protected.

In 2017 the Government introduced a “land swap” policy to compensate HTI companies managing peatlands for areas that need to be restored, by giving them access to non-peat lands elsewhere in Indonesia. However, Koalisi Anti Mafia Hutan criticized this policy after showing that 40% of the areas identified for the “land swap” policy are covered by natural forest. Both local communities and companies have voiced concerns about a high risk of social conflict if the “land swap” policy is allowed to proceed.

The Ministry of Environment and Forestry has told members of this coalition that the policy would not be implemented, but until now it has not been revoked. KAMH calls on the Government and APP/APRIL:

1. APP and APRIL and/or the Ministry of Environment and Forestry to immediately release the revised annual work plans (RKT) and five-year work plans (RKU) for all pulpwood suppliers, showing detailed management plans for peat protection and restoration zones that have been approved by the Ministry.

2. The Ministry of Environment and Forestry to revoke the “land swap” policy.

3. APP and APRIL to publish maps of its suppliers’ current planted area in each HTI concession. 4. APP and APRIL to adopt accountable plans to phase out completely their use of wood fiber sourced from drained peatlands and the management of peatlands under their control for commercial plantations.